This 3-manual and pedal organ was located in a chancel chamber on the south side of the church which is now the main entrance and lobby. It was typical of its time in both tonality and construction. As with many mechanical action organs of its time, with engineering & pallet pluck pressure calculations not as advanced as modern computer design can give, its key touch was heavy and this has been reported by those who remember it of old.

When the reordering of the church took place in 1981, which involved closure of the west door due to road extension (never full executed), a new entrance was needed and the old organ chamber was the best option for it. The old Jardine organ was discarded and its fate is unknown. It is possible that George Sixsmith saved the best for his pipe stocks.

Its specification was thus:

With the transformation of the organ chamber into a new entrance lobby, a new position needed to be found for a new organ. This was to be at the west end of the church.

An organ was designed by Gordon Thorne (church architect) and installed for the re-opening of the church which was predominantly paid for by the city council in return for the closure of the west door.

It was billed as, and the church thought it had, a new organ. What, in fact, was installed was a 3-manual organ by J. J. Binns of Bramley, Leeds which had previously been removed form a church in Peebles, Scotland. The original construction date of the Binns organ is similar to that of Christ Church which seems strangely suitable.

Upon installation, the organ was reduced to 2-manuals and pedals. The old Choir soundboard became the Great upperwork soundboard with the original Great soundboard assuming a ‘fonds’ role. There were also several additions to this Binns instrument which were not, unfortunately, in tonal keeping with the original and not sympathetically voiced.

Other additions included a Pedal Schalmei (not actually a Schalmei but a small scale Trompette), a 4’ flute and Larigot to the Swell (placed on a new

chest sited over the existing soundboard), a new Great Trumpet (placed horizontally) and changes to the wind system. The latter was never satisfactory and we have found records for the late 80’s which confirm this.

Various repairs and alterations have taken place since the organ was installed.
Over the past 8 years they have included;
– console capacitor replacement
– addition of a secondary wind-trunk to the Great upperwork soundboard
– repair to the Chamade (mid 90s – including placement of the lowest horizontal pipes into the case)
– Swell Larigot transposed to Tierce

Finally in 2009, the Chamade reed was completely renewed and re-hung. The original solder joints were failing and repairs eating-up valuable tuning. The stock pipe-metal resonators (with soldered-on bells) beginning to sag.

Nicholson of Malvern removed the rank to their workshops where new French shallots and tongues were installed, the resonators repaired and strengthened, the supports improved and the chest magnets replaced or repaired. The pipes which had previously been placed inside the case were, once again, place horizontally on the front of the case. The tonal direction of the revoicing was based on the Hermann Chamade installed at the request of the late master Cochereau on the organ of Notre Dame de Paris. 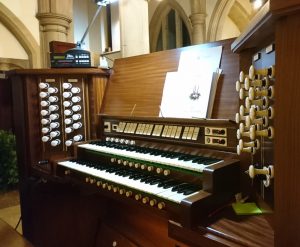 Major remedial work to the instrument along with a few tonal alterations has recently taken place.

Work undertaken has been:
– repair to the wind regulators and alterations to the winding system
– replacement of the faulty electromagnetic combination action with a new digital system
– addition of Swell sub octave and super octave couplers
– re-casting of both Great and Swell mixtures
– availability of the Swell 16’ reed on the Pedals
– Chamade placed in a new ‘Bombarde’ division available at 16’/8’/4′ with transfers to Great, Pedal & Swell (non-coupling)
– moving of the couplers to rocking tabs above the Swell manual
– addition of extra general pistons and reversibles
– addition of Maual Bass (for non-organists)
– addition of ‘Pedal Divide’ function with adjustable split point)
– addition of ‘MIDI’ capability and record/playback facility

Here’s a demonstration of its resources:

The Viscount has been in Christ church for almost a year and replaces a 1986 Makin analogue organ (which we have in store). It utilises the new Physis physical modelling technology which creates sounds based on a model of a pipe rather that a recorded sample.

This new technology not only enables the organ to be voiced form the console without need of a computer but also enables the organist to change stop waveforms (from a built-in library) as required.

The organ is in Christ Church on long-term loan from Viscount Organs an is being used in the development of new organ speaker technology by Marc Ogier of Hush Audio (based in West Didsbury) who is a church member and accomplished organist. The speakers you see (and hear!) today are the result of many years’ research and development and have been created with the aim of providing a true organ speaker for English organs rather than the continentally ‘thin’ sounding offerings on the market or the P.A. speakers used by some companies.

This organ can also control most of the resources of the nave organ through MIDI (keys, stops, expression pedals etc) which proved very useful in responsorial settings.

The organ has both English (Willis) and French specifications devised by Richard Lowe. You can here some demonstrations here:

Baptisms, Weddings & Funerals
For baptisms and weddings, see the information on these pages
Weddings / Funerals / Baptisms